FlexShape aims to maximize the value of flexibility by making it explicit using the revolutionary "Big Energy Data" FlexOffer concept. The FlexOffer concept and technology has been developed at the Center for Data-intensive Systems (Daisy) at Aalborg University since 2010 in the large EU FP7 projects MIRABEL and Arrowhead, and the large Danish Totalflex project supported by Energinet.dk's ForskEL program. Recently, FlexOffers form the core of the GOFLEX project (starting in November 2016) which was top ranked in a recent Horizon 2020 call on integrating renewable energy in distribution grids. In total, these projects have received grants of over 85 mio. Euros. Information about FlexOffers and related material can be found here.

In the above figure, there is a baseline profile (thin red lines) which represents the device operation starting at 3 am when no flexibility is activated. With respect to this baseline, it is possible to advance or delay the device operation within the allowed time flexibility interval. Further, it is possible to increase or decrease electricity consumption within the allowed energy amount flexibility ranges (orange intervals) at every 15min time interval within the full device operation duration of 2 hours. Similarly, FlexOffers with negative energy amounts can be generated for flexible resources producing instead of consuming electricity. Thousands (or millions) of such FlexOffers, both for consumption and production loads, can be efficiently aggregated into macro FlexOffers representing much larger energy amounts suitable for energy market trading. Then, aggregated FlexOffers can be scheduled (optimized) and finally disaggregated back again with no or little loss of flexibility: 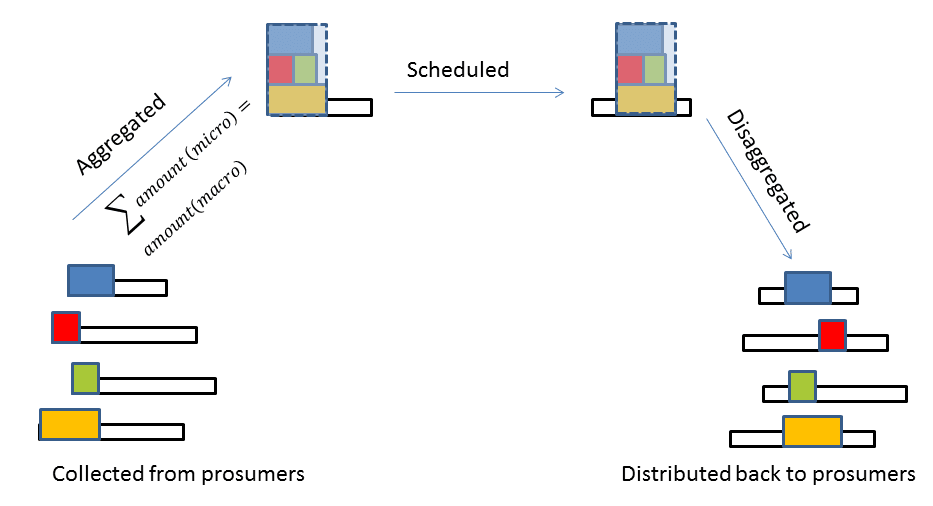 It interconnects the actors of the Harmonized Electricity Market Role Model, such as electricity prosumers, aggregators, traders (balance responsible parties), and system operators.